Strengthening the Rule of Law in Crisis-Affected and Fragile Situations 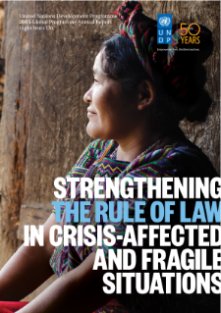 The rule of law lies at the center of the relationship between society and the state. Measures to establish or strengthen the rule of law are the basis for creating accountability among people as well as between citizens and their governments. Since 2008, UNDP has been a leader in supporting the rule of law in countries affected by crisis through its Global Programme for Strengthening the Rule of Law in Crisis-Affected and Fragile Situations. This Annual Report, Eight Years On, marks the end of Phase II (2012 –2015) of the Global Programme and sets the stage for the implementation of Phase III (2016–2019). Part I of the report, Looking Back to Look Ahead, depicts the transformational change brought about by rule of law programming during the first two phases of the Global Programme – a period of eight years. Part II, Serving the UN System, highlights UNDP’s collaboration with other UN entities and details important policy developments that affect rule of law assistance from the perspective of high-level officials across the UN. Part III, 2015 Year in Review, provides a synopsis of the key results achieved by UNDP in 2015 in assisting countries to increase safety and security, deal with the legacy of violence, build confidence through accessible and effective justice and security institutions, and improve the delivery of justice and security for women.