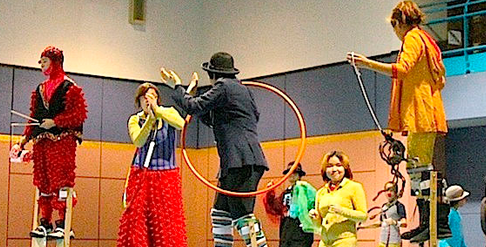 Living in the UK for the last year and a half, I have come to discover the glaring differences between North American culture and Britain in regards to social circus. I say North America because I grew up in Canada, went to school in the US and worked for a social circus project based in Chicago, CircEsteem for two years. North America is inherently multi-cultural. Immigrants founded the continent and American and Canadian culture has been bred from a hodge-podge of all different nationalities. Though the U.S. has many racism issues, there still remains the acceptance that different nationalities have and always will live in the same space. Canadians in general have less issues surrounding racism, we are polite and since we are a much younger country and have a smaller population, immigration has always been a fact of life. However, it is common for immigrant families to be among the poorest in North America and have fewer opportunities whilst remaining in their isolated neighbourhood. Social circus is the use of circus arts within under-privileged communities as a means towards social justice and social good. As a social circus practitioner, I regularly visited these neighbourhoods to teach circus to youth who have next to nothing and see circus as a welcomed distraction as well as something they can excel at. Often, depraved youth are incredibly tactile and pick up circus skills quite quickly. Circus is a metaphor for the rest of their lives, believing they can’t do something and then they realize that they can achieve anything if they put their mind and body to it. There is a large divide between social classes in North America but, in my experience, the upper class didn’t have a large problem with subsidizing the lower class in the circus communities. Rather, they understood the power and potential of circus and it’s investment into the future. The more you invest in projects that help the poor, the less violence and crime will inevitably occur. In the UK the general attitude towards social circus is different. There is less outright racism but British people tend to be less ‘outright’ in every respect. This doesn’t mean that racism doesn’t exist. Rather, it is bottled up and stewing in the pit of society’s bowels. The UK is technically a part of Europe but only since living here do I see that they don’t actually consider themselves a part of Europe. For many, there is resentment towards Europeans, especially Eastern Europeans that have moved to the UK. They often live in segregated communities where they speak their own language and find it difficult to get jobs. They are ostracized from society, punished for seeking a better life for their families. At the moment I feel circus is a rich kid’s game. It is fashionable to go to a fancy circus school, graduate with a poncy act and then see how much you can charge. Gigging and teaching are really well paid compared to North America. So why would they  go into communities and work for free? The incentive isn’t there. Furthermore, the middle to upper class parents who pay for these fancy circus workshops would cower at the prospect that any money be used to work with “gypsy kids”. British people won’t accept all facts of globalization; it doesn’t just mean American MTV shows and Kraft taking over their chocolate. People want a better life, so they seek refuge in wealthier countries and try to make it. Helping them will help everyone and create a happier society. Ignoring these cultures that have moved to the UK and pushing them away will perpetuate crime and violence. I truly believe circus, a non-verbal skill that teaches one personal strength, can save the youth that are failing school and being bullied by their peers. Britain is behind in the social circus movement. In fact, most people don’t even know what social circus means. Circus artists are too concerned about obtaining a grant to realize some gratuitous vision that hardly anyone understands. The world does not need more circus masturbation! Or they are interested in the “noble” cause that is travelling to Asia to an exotic climate to do social circus in the winter when they have no work on. They could really make a difference by staying at home and directly help their community in their own backyard! As circus practitioners it is our duty to use the power of circus to help people. Trust me, you will feel far better teaching a group of under-served youth to spin plates than you will showing up at a posh house in the countryside to teach a group of drooling four year olds how to juggle for an hour dressed as a clown. By Tess Cartwright Fonte: Cirque Chic