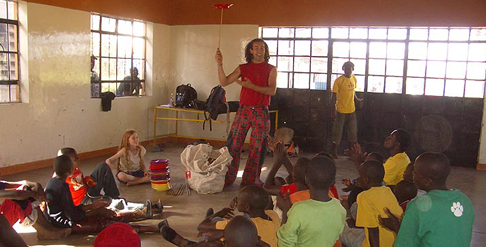 It used to be widespread, a great notion that would come to people when the going got tough, or some sadness or loneliness tumbled their way: ”I’ll run away and join the circus.” ”The circus is a wonderful fantasy,” Nell Stroud, the author of ”Josser,” a memoir of circus life, once explained. ”But at the same time, all the elements of it are familiar ones — the horses, the dressing up, the fact that it is a family-based business.” The allure of the circus is equal parts grit and glamour. Alek Wek is also equal parts grit and glamour. Before she and her eight siblings escaped with their mother to England, she spent her childhood in war-torn southern Sudan, where one night gunshots were fired into their home. Her recent visit to the Ringling Brothers and Barnum & Bailey circus in Orlando, Fla., at the start of its 2003 tour, was her maiden trip into the official world of three rings. Alek, the supermodel representative from Planet Fashion (the unofficial circus of three rings), was greeted with open arms, a warm meal and a new nose. (Hostess notes from all over: when they really like you, the clowns give you noses — red and rubber — not roses.) The ringmaster, Johnathan Lee Iverson, and his wife, Priscilla Costa, organized a small dinner for Alek in the ”pie car,” the circus canteen in what is one of the longest private trains in operation in the United States. (Although the circus hasn’t appeared under a tent since the early 1950’s, setting up camp in convention centers and auditoriums instead, it still travels by rail.) Priscilla, who is the circus dance captain, prepared a meal of her native Brazilian specialties, including battered chicken breasts, cauliflower au gratin, fried yucca cake and, of course, rice and black beans. Also joining the party in the pie car were Bello Nock, comic daredevil, and his wife, Jennifer. ”Food is a big topic in the circus,” Bello explains. ”With so many nationalities in the cast and crew, food is common ground, a way to get to know each other.” Fonte: New York Times